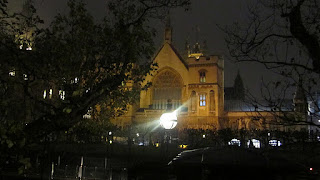 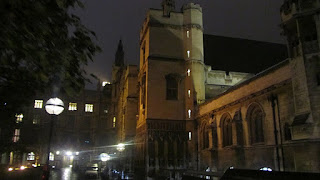 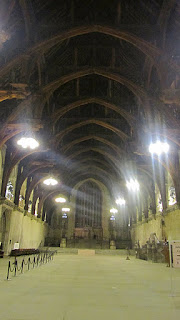 Pauline Latham OBE MP was delighted to launch the “Big Society Initiative for Africa” in the Houses of Parliament on Monday 7th November in association with Emmanuel Neba Fuh, the Campaign Co-coordinator at British Aid for Africa Consortium.

The official launch took place at the CPA room (Commonwealth Parliamentary Association Room, Westminster, Houses of Parliament, London) The landmark event provided an opportunity for Britain to stand alongside Africans in holding the African Union to account and prevent African leaders from continuing to perpetuate themselves in office for a lifetime.

Emmanuel Neba Fuh has said: “Without good governance, and unless we beat corruption, we will never defeat poverty in Africa” He adds “The lack of concrete steps to put the African Union Charter on Democracy, Elections and Governance mechanism into effect is undermining the UN Millennium Development Goals and making elections a growing source of conflict in Africa

Emmanuel believes that the African Union must introduce a clause in the African Union Charter on Democracy in relations to Elections and Governance in order to prevent African leaders from staying in power for more than 10 years.

Pauline Latham OBE MP said:“The problems of Africa are well documented and have been greatly publicised for years. The issues that Africa face are issues that the British people take a great interest in – be it the civil wars in Rwanda, the Democratic Republic of Congo or Angola, or the refusal of leaders to respect the will of the people through the ballot box as we saw in Kenya, Zimbabwe, and most recently Ivory Coast and North Africa”

The British Government has asked that every British Citizen get involved with their local community, engage in voluntary work, help provide services to those less fortunate and stand together to do what is right.

The British Aid for Africa Consortium acknowledges that post election violence has destroyed the lives of millions of Africans and remains one of the root causes of extreme poverty, hunger and disease in Africa. This violence is attributed to bad governance. It prevents African nations from achieving the Millennium Development Goals. Without good governance, and unless corruption is beaten, poverty will never be defeated in Africa. 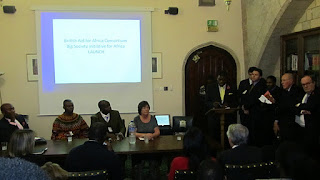 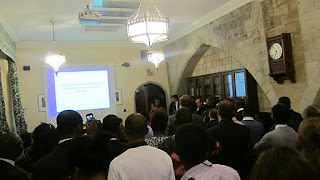 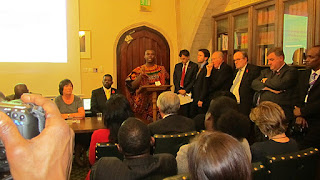 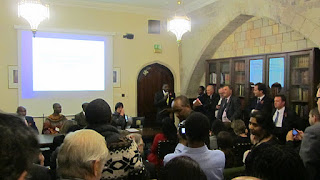 The aim of the event was to bring together the UK African Diaspora, UK policy and decision-makers, and to galvanize public support for the introduction of a clause in the African Union Charter on democracy, elections and governance – that will prevent African leaders from staying in power for more than two terms (10 years).

It is believed that this innovative approach will prevent African leaders from perpetuating themselves in power for a life time, uphold the integrity of elections in Africa, and lead to a more secure, prosperous and stable Africa.

British Aid for Africa Consortium is a registered charity which tackles the root causes (and not the symptoms) of extreme poverty, hunger and disease in Africa and exists to enhance the contribution of the UK African Diaspora to Africa’s development. For further information about British Aid for Africa Consortium and the Big Society Initiative for Africa, please visit www.britishaidforafricaconsortium.org.uk

Live music by Tafirenyika Mushuku and An Art Exhibition by Shiri Achu provided light entertainment and related distractions from the full bodied speeches.

I was invited to this high profile Launch to exhibit pieces to represent beautiful Africa! To play my little part in this campaign I decided to donate 20% of all sales made on the day to BAAC. 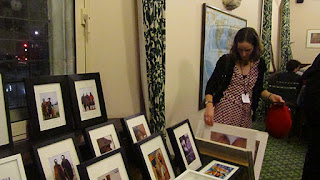 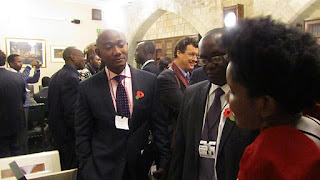 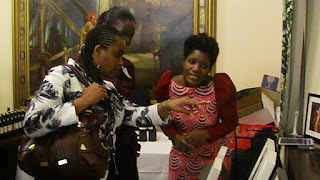 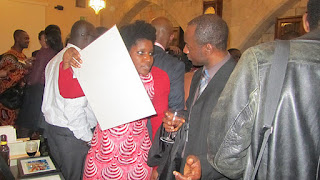 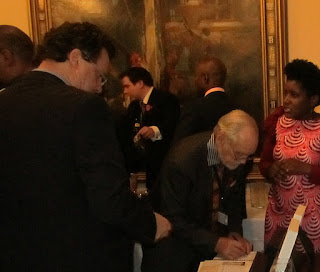 Some of the pieces I exhibited included ‘One African night’, ‘Ma Africa Pounds’, ‘The Climb series’, 'Maasai soul' and 'Midnight tradition'. Because of the set up of the room I was able to exhibit framed SHIRIACHUART signed limited prints as opposed to the originals as many of my original pieces are very large.
I was humbled when Lady Marie picked up the piece she was interested in buying ‘The climb series’ and said it was worth more and then wrote a cheque for a larger amount. Further purchases from an MP and a Lord...

I am always humbled and excited when people buy my art, notably my African inspired art. I am particularly touched when they buy not simply because it is an attractive image (they like the colours etc) but also because they are taken by the culture and the message and they want to be reminded of it through my art.

Being originally from Cameroon and knowing our political system there, with President Paul Biya in power for as long as I can remember, the campaign is one I feel passionately about. So; at the end of the evening, I was very happy to place my donattion in an envelope to hand over to this great cause.

Over to you! Do you believe in this campaign? What are your views and comments? If you do believe in BAAC, please do what ever you can do to play your part. Do visit the website; www.britishaidforafricaconsortium.org.uk and/or Contact the members of BAAC etc

Our small steps today can only make for a stronger Africa tomorrow.

Wishing you all a great week ahead.